Recently, social media has been flooded with posts about kids’ clothes. The cause? A couple of our UK high street retailers (John Lewis and Clarks ) announced their plans to do away with “boys” and “girls” labels, and sell their children’s ranges as unisex.

A read through the flurry of social media comments reveals a nation divided: one side thankfully commending the retailers for their open-mindedness, relieved that their children can now freely choose clothes they like without stigma, and without being made to think those were “only for boys” or “only for girls”; the other side complaining, either that this would make clothes shopping so much more laborious, or that this was political correctness gone crazy, that boys should wear boys’ clothes, girls should wear girls’ clothes, and that’s that.

Personally, I find myself firmly on the thankful side.

Jessica (my 6 year old) is very sensitive, both emotionally and physically, so clothes are a big issue in our house. Anything with frills, lacy edging, capped or puffed sleeves, or fancy embellishments (ie the majority of the “girls” section in many shops) is out of the question for her, because they feel unbearably irritating on her skin. And while both she and Amy (my 5 year old) love unicorns, kittens and “fashion” dolls, they are also massive fans of Star Wars, dinosaurs, Minecraft, Pokémon, Paw Patrol and Blaze, all of which I’ve noticed (at least where clothes are concerned) are often marketed towards and labelled for boys, rather than girls, by many retailers. Which IS frustrating. 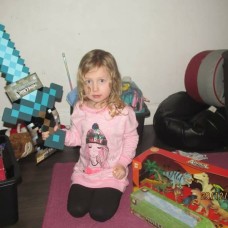 Thankfully, in the last couple of years, in the shops we use (mainly supermarkets and budget-end clothes shops) there has been more overlapping of styles, colours and especially character designs, across the girls’ and boys’ sections, but still I find myself browsing both sections, to find the right T shirts, tops, hats etc. When I’m shopping alone, this is nothing more than mildly annoying, but when I’m with the kids, it’s an uneasy feeling having to coax your sensitive 6 year old daughter into the boys’ section, to show her that there’s more clothes in there that would be right up her street. Then come the protests: “No, look, it says those are boys’ clothes! These are the girls’ ones!” And despite being on a mission to teach my kids that conformity is overrated, sadly they are bombarded with it from virtually every other angle, that girls should stick to certain designs with their specific selection of colours, details and characters, and boys should stick to theirs.

Perhaps the most noticeable culprits are the characters and colours of underwear. Boys’ underwear (understandably) is shaped differently to girls, making department-hopping less of an option. But have you ever tried finding Star Wars or Pokemon themed girls’ underwear? Everything, frustratingly, is pink and emblazoned with princesses, unicorns or equally stereotyped designs. But it hasn’t always been this way…

Interestingly, customs and traditions around children’s clothing have varied widely throughout the generations. Did you know, for example, that (according to this article) throughout much of the 19th century, it was normal for all young children, regardless of their sex, to be clothed in plain white dresses? Practicality overrode fashion: the dresses were easy to get on and off, and allowed for relatively fuss-free nappy changing, and the plain white colour allowed for easy bleaching.

Things gradually changed later in that century, with the introduction of more colour, until it was customary for little BOYS to be dressed in PINK, and GIRLS to be dressed in the “more delicate” pastel BLUE (yes, you DID read that correctly).

Later still, according to that article, moving into the 20th century, children’s clothes once again became much less segregated, with no particular colour or style associations. Gender-neutral romper suits were the order of the day. It wasn’t until the 40s, that the whole pink and blue thing began again, this time with boys’ clothes predominantly blue and girls’ pink. Marketers must have jumped at the opportunity to persuade us we needed to kit our babies and kids out in the correct colours. And as consumers, we fell for it, hook, line and sinker.

And the characters? Well, that’s the product of our obsession with media. Film-makers and TV producers very cleverly market their characters to very specific audiences, and their merchandise follows suit. But what if you’re a girl that likes Transformers or Ninja Turtles? What if you’re a boy that wants to wear a pink or purple shirt, or buy a Paw Patrol hat with Skye on it, rather than Marshall?

And why are some people so opposed to allowing our kids this autonomy, this freedom of choice? 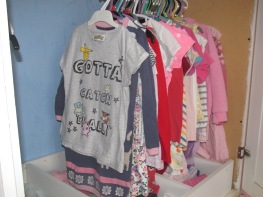 In most cases, it’s not a practicality issue: the clothes are functionally the same (with the exception of perhaps underpants or trousers that may be shaped differently for obvious reasons). So why the segregation? When you consider the way kids’ fashion has changed throughout history, to insist we should keep things this way forever, seems pretty closed-minded and stubborn. Future generations do not have to live exactly like past generations, surely? We learn from history and move with the times, don’t we?

And will it really make the task of shopping more arduous and laborious? I can understand this point, that it won’t be as simple as walking straight to the “girls” section or the “boys” section (or clicking on one tab or the other on a website). But on the other hand, it opens up a whole load more options for children and their parents. Maybe there were some great t-shirts, that would have suited your kid perfectly, but you never saw them because you never ventured into the other aisle. Maybe your child will have the opportunity to brighten up their wardrobe with a whole new range of colours that were previously “unavailable” if you only ever shopped in that one section of the clothes shop. Maybe your child will leave a shop, even just a tiny bit happier that he found the perfect pair of shorts that felt just right and made him feel like a million dollars. Maybe your daughter will finally feel comfortable wearing sturdy, protective shoes that are more suited to playground running, climbing and scuffing that all children should be free to enjoy. So if it really does mean a shopping trip takes a little longer than it used to (though I’m skeptical that it even would in reality), then that’s not a bad thing.  A browse around the shop might just open your eyes – or your mind – to some new products or designs you weren’t aware of.

But even without all that, why should we be told what colours, designs or styles our children can or can’t wear, by the very businesses whose purpose is to serve us? We are the customers, not the slaves. We should be telling THEM what WE want to buy, and if they want our custom, they should be taking notice and delivering the goods, not the other way around. Thankfully, parents and families ARE speaking up about the types of clothes we want for our children, and thankfully, retailers like Clarks and John Lewis are listening.

This is not about political correctness. This is not about denying that “boys are boys” or “girls are girls”. And it’s not about somehow forcing “gender fluidity” on people, as some of the protestors in the social media comments seem to be very wary of. It is not denying anybody anything, or forcing any ideals on anyone. In fact, it is the opposite; it is about retailers listening to, valuing and responding to their customers. But more importantly, it is about widening choice for our children, freeing them up to wear the clothes that they find most comfortable, most practical, or most appealing, no matter who they are.

Clothes don’t need to be assigned a specific gender.

Can we just let clothes be clothes?